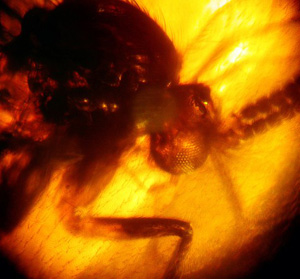 Since almost everything I write lately is for other people, I’ve taken to including performance notes with my scores. Sometimes almost nothing needs to be said. Other times, well……

Like ancient insects preserved in amber, in this piece four saxophones are presented as specimens for admiration and study.

Time is an important element in this chart, specifically tempo. There are four tempos, one for each saxophone, progressing inversely with the sounding voice (in other words, as the saxophone voice moves higher, the tempo decreases).

The four tempos are related by simple mathematical relationships. At the threshhold between each section, there is a specific metric modulation which is the key to the subsequent tempo. The upshot of this is, whatever tempo you start with is going to affect all the others, so it’s important to make sure you start out as close to q=278 as possible.

Another key element is, actually, key. There are a number of key changes in this piece which sometimes, but not always, synchronize with the tempo changes. But they always go down by step, either by a whole tone or a semitone. The piece begins in Db (a mixolydian flavor of Db), and ends up in the depths of G minor. The tritone movement over the course of the piece is deliberate, of course.

Helping to enforce this sonically is that the bass instruments are all pitched unusually high in the beginning of the chart, and progressively descend throughout the piece. Therefore, those playing bass instruments (baritone saxophone, bass trombone, acoustic/electric bass, left-hand piano) should resist the temptation to play anything down an octave from where their parts are written…. there is a method, as it were, to the madness. The bass part actually has a little note included to that effect.

Regarding bars 304-305: by this point, the 3-note chromatic figure has been broken up among many voices in the ensemble, so that no one is synchronized with anyone else, making a sort of quiet murmuring texture endlessly repeated. However, everyone should continue to play their 3 note lick with rhythmic precision (not succumbing to rubato). Soprano solos overtop of this, and drums play colors quietly in the back.

In bar 305, everyone continues to repeat (or rest) as they have been while the conductor counts off the drummer. The metric modulation goes like this: the group of 3 dotted sixteenth notes in the old tempo becomes triplet eighths in the new tempo. So conducting one beat for each group of 3 notes is the new tempo (should feel pretty slow). Count off the drummer “one-two-three…” and on four he plays his part in bar 305, four dotted eighth notes on the “four” of the count-off (four notes in the space of three). These are sixteenth notes in the new tempo, which is a sixteenth-based funk groove.

The voices who were playing the repeated 3 note lick just keeps on repeating through all that, and when we reach the downbeat of 306, they complete the lick whereever they happen to be and hold their final sustained note until beat 4 of 307.