Russell Scarbrough’s compelling, visceral works reflect a diverse array of musical resources, drawing inspiration from both the jazz tradition and from contemporary classical music. His music is filled with engaging themes, with rich contrasts and unpredictable rhythmic energy. A ten-time ASCAP Plus Award recipient, Scarbrough’s works are regularly performed by jazz ensembles, orchestras, and chamber groups internationally, and he makes frequent appearances as an educator, a conductor, and a performer. 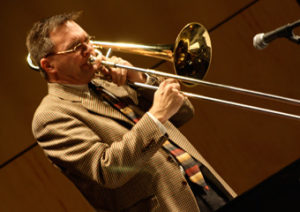 Scarbrough directs three main projects for showcasing his original music and arrangements: his 18-piece ensemble, the Russell Scarbrough Big Band, features his own works in a strikingly original voice; the 12-piece Soul-Jazz Big Band features the earthy jazz of the 1960's and 70's, and the Russell Scarbrough Orchestra featuring Frank Torchio revisits the classic performances of Frank Sinatra and Ella Fitzgerald. 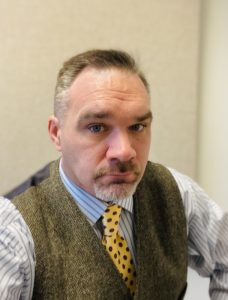 Russell Scarbrough is Assistant Professor of Jazz Studies and Jazz Ensemble Director at Houghton College. He also directs the Canisius College Jazz Ensemble, and serves on the faculty of the Csehy Summer School of Music. Previously, he served as conductor of the Houghton Symphony Orchestra from 2020-2022, and directed the Roberts Wesleyan College Jazz Ensemble from 2005-2013. Scarbrough studied composition with Hank Levy and Bill Dobbins, and received his Doctor of Musical Arts degree from the Eastman School of Music.

His album of original works for 18-piece big band, FUN TIMES, will be released in the fall of 2022.

“[Bow Shock] is a jazz-tinged, driving, hyper-energetic work that invites the listener to fasten his seatbelt for the ride. It was a win-win-win: the Irreras can be well pleased that this work shows them to such great advantage. Scarbrough should be delighted with such accomplished musicians giving his music such a dynamic performance.”
Jeffrey Williams, New York Concert Review, New York, NY

“As a composer, Russell Scarbrough’s music is carefully crafted. His attention to every musical detail is thought provoking and purposeful, thus providing a refreshing musical voice to be programmed on any concert.”
Jared Streiff, Jazz Band Director, Hilton High School

“The arrangements not only look beautiful (and are free of errors — how do you do that?) but are superbly crafted… You really made it possible for me to have the program I intended.”
Grant Cochran, artistic director, Anchorage Concert Chorus

“If you want to hear the jazz orchestra music of the future, check out the Russell Scarbrough Big Band… the stars of the show may be Scarbrough’s innovative compositions and distinctive arrangements, using the big band palette in fresh and decidedly different ways.”
Ron Netsky, Rochester City Paper

“Russell Scarbrough has a growing collection of engaging, challenging, and innovative large ensemble charts for serious musicians. He has a fresh voice as a writer and is a humble and passionate conductor. This music needs to be widely performed!”
Bill Tiberio, Jazz Ensemble Director, State College of New York at Geneseo

“Russell’s music is as colorful as it is thoughtful. There is not an easier person to work with on special projects such as these, and THAT makes music making all the more enjoyable!”
Tom Davis, composer, Rochester Institute of Technology

“…My students and I especially loved the time he spent with us working on the piece. It was a great experience for them to hear about the piece straight from the composer. I would strongly encourage anyone interested in a great jazz ensemble piece to look no further. The personal attention and outstanding music will make it an experience both you and your students will remember for a lifetime.”
Brian Ecton, Director of Instrumental Music, Calvert Hall College, Baltimore, MD

“Working with Scarbrough has been a wonderful experience for our ensemble! They were thrilled to receive a commission that recognized their strengths and potential in extremely creative ways.”
Barry Long, Jazz Band Director, Bucknell University